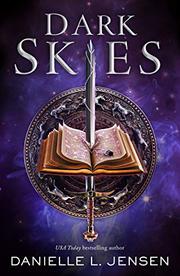 From the Dark Shores series, volume 2

An infernal threat rises in the west in this story that takes place concurrently with Dark Shores (2019).

Roguish Killian, son of a High Lord, has been marked by the god of war; under his command, trickery allows the enemy Derin (who worship the sinister Seventh god) to breech Mudamora. Killian is saved from execution by the king’s daughter, who claims him as her sworn sword—and brings him into her conspiracy to depose her inept father and save their kingdom from Derin’s foul magic. Meanwhile, Lydia navigates the political landscape of Celendrial, where her adopted status makes her position perilous. Her story begins slightly before Teriana’s arrival, continuing until her fateful encounter with Marcus—who has been ordered to kill her—before a leap of faith brings her to Mudamora’s capital, which is under an increasingly desperate siege. The magical elements of the story—from the miraculous works of the marked to disgusting blight and abominations—are seamlessly woven with storylines comparing the plight of common people to the complicated political games the powerful play. Responsibility is the grounding theme that unites the protagonists in their heroic strivings; trauma and the fully rounded characters’ emotional vulnerabilities take their tolls. Readers will be delighted both by further exploring the expertly crafted world and the story’s twists. Lydia is fair-skinned, Killian olive-skinned; race isn’t significant in this diverse world.

Readers will breathlessly anticipate their next venture into this exquisite world.