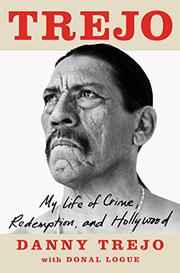 My Life of Crime, Redemption, and Hollywood

by Danny Trejo with Donal Logue

An actor’s noteworthy journey from convict to Hollywood celebrity.

As one of the most easily recognizable cinematic bad guys, Trejo (b. 1944) has made a career of being mauled and maimed across dozens of films, from Desperado to Con Air to Grindhouse to Machete. As the author shows, his real life has been as tumultuous and eventful as any action story. Raised in a large Mexican American family oozing with “macho Chicanismo,” Trejo fell under the influence of Uncle Gilbert, who mentored him in life on the streets. Gilbert taught him how to rob, box, take drugs, and pass a prison sentence. Trejo was 12 when he first tried heroin, and his battle with addiction would land him in one correctional facility after another until he eventually found himself in some of California’s most infamous prisons. From the darkest depths of incarceration, Trejo made a commitment to sobriety and began living by a mantra of service, which showed him that “everything good that’s ever happened in my life has come as the direct result of helping someone else and not expecting anything in return.” Unwavering in his pledge to remain clean and help others do the same, Trejo continues to battle with lingering challenges involving his roles as a devoted husband and loving father. The author chronicles his battles with personal demons alongside his spectacular rise to stardom and impressive success in the entertainment industry and with a Trejo’s Tacos and Trejo’s Coffee & Donuts in LA. Throughout, the author expresses himself in an informal yet consistently thoughtful manner. In the collaborator’s note, co-author and fellow actor Logue writes, “Nearly everything he said was gold: wise, funny, pithy, at times, clairvoyant. I gained more insight on life in those first few days…with Danny than I had in my previous thirty-two years.”