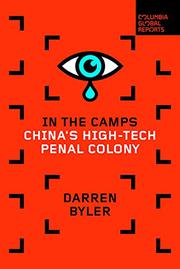 A professor of international studies offers more chilling evidence of the “smart” camps in northwestern China, designed to restrict, punish, and ultimately exterminate the Indigenous population.

Byler, who managed to visit the Xinjiang Uyghur Autonomous Region under strict surveillance and has friends who were “disappeared,” draws on dozens of interviews with Kazakh, Uyghur, and Hui former detainees, camp workers, and system technicians to tell their horrific stories. The author first grounds readers in an evenhanded history of the region, noting the relative autonomy that the Uyghurs used to enjoy in the south; this began to change in the 1990s as China shifted toward an export-driven market economy. The Uyghurs, who are Muslim, protested the unequal economic system, and their unrest was marked as “terrorism” by the Han authorities. Byler draws on extensive ethnographic research in Xinjiang and Kazakhstan between 2011 and 2020, revealing that Chinese authorities have placed as many as 1.5 million Uyghurs, Kazakhs, and Hui into a system of “reeducation” camps since 2017. One young student from the University of Washington tried to visit her family in China and endured months of dehumanizing treatment. An Uzbek teacher of Chinese was enlisted to teach groups of the “uneducated,” though she quickly realized that they were Muslim like her and imprisoned for no reason other than their religion. She spoke of feeling “two-faced” at having to play both roles at the same time and laments the toll it took on her health—as it did other of Byler’s subjects. American firms are complicit: The author emphasizes that the technology used in “smart” surveillance systems used to contain and transform Muslim populations in northwest China are gleaned from Silicon Valley face-recognition tools perfected and exported by companies like Megvii, with deep connections to Microsoft, taking these systems of control to new levels of scale and intensity.

A book full of harrowing revelations of systematic injustice in China and the disturbing involvement of its foreign enablers.