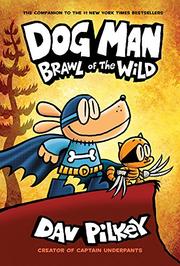 BRAWL OF THE WILD

From the Dog Man series, volume 6

A bit of dog-sledding is the only direct crib from the classic referred to in the title—but themes of loyalty and of oddballs bonding together crop up occasionally. Otherwise, George and Harold’s latest comic pits costumed “supa buddies” (“We fight for freedom—that’s our duty… / …so everybody shake your booty!”) and other allies against a trio of flea-sized villains using a stolen can of “supa evil living spray” to frame Dog Man for a bank robbery and to turn a clay figure from a new Dog Man movie into a rampaging (if eminently sliceable) monster. Meanwhile, in an ongoing subplot, angelic cloned mini-me Li’l Petey continues to chip away at his supervillain parent Petey’s conviction that once a bad guy, always a bad guy. Also meanwhile, to counter Dog Man’s depression at being neither entirely human nor entirely dog (which is true), his friends gather at the end for a triumphal “March of the Misfits.” All in all, a typical wild free-for-all punctuated by Flip-O-Rama and, for special treats, occasional “Hurl-O-Rama” set pieces.

Ginormous fun…with sneaky food for thought and, as usual, step-by-step drawing instructions at the end.