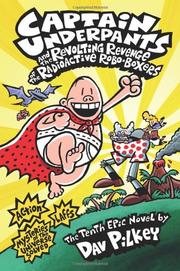 CAPTAIN UNDERPANTS AND THE REVOLTING REVENGE OF THE RADIOACTIVE ROBO-BOXERS

From the Captain Underpants series, volume 10

Zipping back and forth in time atop outsized robo–bell bottoms, mad inventor Tippy Tinkletrousers (aka Professor Poopypants) legs his way to center stage in this slightly less-labored continuation of episode 9.

The action commences after a rambling recap and a warning not to laugh or smile on pain of being forced to read Sarah Plain and Tall. Pilkey first sends his peevish protagonist back a short while to save the Earth (destroyed in the previous episode), then on to various prehistoric eras in pursuit of George, Harold and the Captain. It’s all pretty much an excuse for many butt jokes, dashes of off-color humor (“Tippy pressed the button on his Freezy-Beam 4000, causing it to rise from the depths of his Robo-Pants”), a lengthy wordless comic and two tussles in “Flip-o-rama.” Still, the chase kicks off an ice age, the extinction of the dinosaurs and the Big Bang (here the Big “Ka-Bloosh!”). It ends with a harrowing glimpse of what George and Harold would become if they decided to go straight. The author also chucks in a poopy-doo-doo song with musical notation (credited to Albert P. Einstein) and plenty of ink-and-wash cartoon illustrations to crank up the ongoing frenzy.

Series fans, at least, will take this outing (and clear evidence of more to come) in stride.