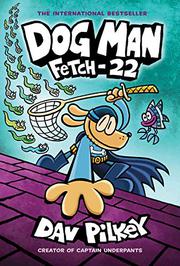 From the Dog Man series, volume 8

Dog Man cedes the limelight to Li’l Petey, the crime-fighting kitten, in this hilarious new adventure.

Fetch-22, which does bear a passing thematic resemblance to its namesake, follows the familiar Dog Man formula: an introduction by George and Harold, who attempt and (happily) fail to throw out all things childish; several pages of recap, serving to inform the reader of Dog Man’s origin, Li’l Petey’s shared-custody situation, and the incarceration of the elder Petey’s treacherous father; finally, a headfirst dive into the action. This action splits itself among three main threads: The Fair Fairy, a deranged television star, gets fired and vows to exact her revenge on the whole city; Li’l Petey discovers a nefarious chemical compound that produces “psychokinetic brain powers” and “supa anger”; and Grampa breaks out of jail by disguising himself as his son. These threads take a while to converge, making space for both heartwarming moments and Pilkey’s characteristically wacky humor. The pace of the story amps up wonderfully when the Scooby Doo–esque final battle begins, although some of the morals espoused may come off as slightly heavy-handed. The simply colored backgrounds beautifully highlight the characters’ lively expressions, and impressive action sequences abound. The unexplained animation of a tree via psychokinesis comes as an especial (and especially strange) delight. Extensive backmatter includes “news” articles, drawing tutorials, and song lyrics; human characters are diverse.

As ever, Dog Man and friends demonstrate that the power of friendship truly can change the world.