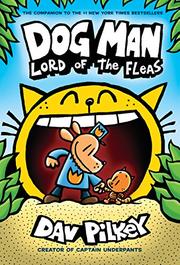 LORD OF THE FLEAS

From the Dog Man series, volume 5

Confession proves good for the soul of Petey, “world’s most evilest cat,” when past misdeeds rear up to threaten him and his saintly clone, L’il Petey.

Adding in a free-wheeling mix of literary references, moral disquisitions, and stupid knock-knock jokes, Pilkey once again has superheroes and kaiju mix it up in squared-off panels of simply drawn, action-oriented cartoons. Here, the arrival of a giant robot brontosaurus driven by the vengeful Fuzzy Little Evil Animal Squad—“We’re not crooks! We’re megalomaniacs!”—pitches Petey and his annoyingly peace-loving mini-me into a rolling fight/flight. Naturally, “Supa Buddies” Dog Man (as “The Bark Knight”), robotic sidekick 80-HD, and, to diversify the otherwise all-animal cast, some previously introduced human regulars, dive into the fracas, and Flip-O-Rama sequences ensue. The FLEAS receive proper comeuppance (comedownance?) thanks to a handy shrink ray, and then it’s time for a dose of wisdom in the form of a dialogue between Petey and Li’l Petey: “If you’re good, nobody cares!!!” “Ya gotta be good anyway, Papa!” “If you’re kind, people just think you’re weak!” “Ya gotta be kind anyway, Papa!” Following a promise of more such “maturishness and deepality” to come, the author closes with his customary drawing lessons, plus plugs for the benefits of reading aloud to pets.

Actually, along with laffs aplenty, a fair quantity of “maturishness and deepality” for biguns and littluns alike.