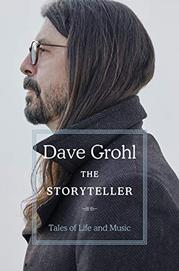 Tales of Life and Music

Grohl’s memoir is thick with name-drops, but not for the sake of gossip or even revelatory detail. (Fans likely won’t learn anything about Kurt Cobain they didn’t already know, except perhaps his choice for cheap sustenance in the band’s pre-fame days, a canned-tuna-on-toast concoction dubbed “shit on a shingle.”) Rather, Grohl’s name-drops are of the “can you believe I get to do this for a living” variety: backing Tom Petty and Iggy Pop, meeting musical heroes from Little Richard to Joan Jett, singing “Blackbird” at the Oscars, performing at the White House, and filling arenas all over the world. As the book’s entertaining early pages reveal, Grohl was an unlikely candidate for global stardom. An accident-prone kid and unschooled drummer raised in a middle-class suburb of Washington, D.C., he caught the punk bug at a Naked Raygun show in Chicago, later dropping out of high school to join Scream. Though Scream was only moderately popular, Grohl thought he'd reached the mountaintop, so Nirvana’s massive fame, followed by Cobain’s suicide, was seriously disorienting. Still, the author is upbeat even when talking about lean or tense moments, like when his body finally pushed back against his five-pot-a-day coffee habit. Grohl is good company, but the gee-whiz tone as well as the clichés (hanging out with the members of metal band Pantera is “not for the faint of heart”) make the book feel like a missed opportunity. Grohl survived a massive band’s collapse and leads another hugely successful act in a genre that’s no longer dominant. Rather than exploring that, he’s largely content to celebrate his good fortune. Perhaps when he finally hangs it up, he will dig more deeply into his unique career.

A high-spirited yet surface-level glimpse into the life of one of the planet’s last rock stars.