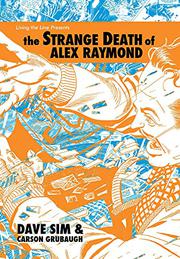 THE STRANGE DEATH OF ALEX RAYMOND

With both metafictive and metaphysical slants, this exploration of midcentury photorealistic comics artists introduces Jack, a pretty young White woman working at Local Heroes Comic Books & Graphic Novels. She finds a strange comic on the counter called “The Strange Death of Alex Raymond,” and as she finishes reading it, the next issue suddenly appears. Chronicling the untimely death of artist Raymond, Sim and Grubaugh’s work transports readers along a comprehensive and dense history of the photorealistic style and the cadre of artists that shaped its evolution. However, about halfway through, the narrative switches course, eliminating Jack almost entirely and instead drawing increasingly tenuous and esoterically obsessive links to Gone With the Wind author Margaret Mitchell. As the title dives down these rabbit holes, the text increasingly descends into incomprehensibility, punctuated with recursive chants and repetitive numerology. This devolution makes further reading extremely challenging, as intricate panels become cramped and text bubbles obscured. The finely detailed, highly stylized art, however, is beyond masterful and a true accomplishment. Ultimately, this is overly complex for a casual comics history buff and perhaps best appreciated by an academic audience.