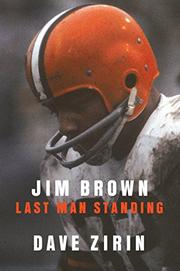 One of the greatest—and most controversial—athletes of all time gets a well-balanced biographical and historical treatment.

Jim Brown (b. 1936) is arguably the best football player in the history of the sport, a truly larger-than-life figure who may have also been the best lacrosse player ever. “From the moment he stepped onto a playing field,” writes Nation sports editor Zirin (Brazil's Dance with the Devil: The World Cup, the Olympics, and the Fight for Democracy, 2014, etc.), “the operative emotion expressed in describing Jim Brown has been reverence.” Few would argue, but as always in Zirin’s books, the playing field is only one element of the narrative equation. The author ticks all the biographical boxes—multisport star in both high school and college; tumultuous career at Syracuse, where he truly began to understand the scourge of racism; Hall of Fame career with the Cleveland Browns; up-and-down forays into Hollywood; lifelong activism—but what is most refreshing about this book is Zirin’s focus on Brown’s character, both awe-inspiring and highly flawed. Brown has spent his life fighting racism and advocating for economic and social justice for the black community, but he has also been accused of rampant misogyny and instances of violence against women. He has brought together rival gang members in his own home but also managed to shut out some of those closest to him due to stubbornness to remain on top in a “world of competing male egos and unfettered ids.” As Zirin notes, for Brown, maintaining his manhood—however he conceives of it—has been the most important driving factor of his life. Brown simply refuses to be “soft” in any way, and he is not shy about criticizing the current athletes who, writes the author, “have fumbled the baton passed to them and surrendered an awesome opportunity to affect seismic social change.” Zirin, who spent considerable time with Brown, deftly navigates this rocky terrain, providing ample room for Brown to tell his own story and for others to weigh in as well.