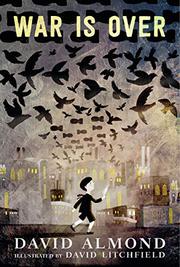 A young boy in the north of England wrestles with the repercussions of World War I.

John’s father is away at the front; his mother works in hazardous conditions at the munitions factory. When John’s classmate’s uncle, a conscientious objector and therefore outcast, agitates for peace, he is dragged off by the police, leaving behind only some drawings of German children. One escapes destruction by John’s classmates—a portrait of a boy called Jan that John secretly saves. Nudging the line between imagination and reality in classic Almond fashion, the deceptively simple third-person narrative describes how John and Jan meet in the dark woods and connect as children who simply long for peace. In scenes enhanced by Litchfield’s dreamy, haunting black-and-white illustrations, Almond effectively juxtaposes the contradictions of war: John’s warm, loving mother uses her hands both to make rose-hip jam for his bread and to build weapons that will kill other small boys just like him. This slim volume contains depths that adults will wish to explore with young readers, from allusions to “Bread and Roses” to the meaning of the white feathers used to shame pacifists but that the scorned Uncle Gordon proudly claims as things of beauty. The story offers rich material for considering the impact of war on those on the homefront as well as the toll rabid conformity and hatred of the Other takes.

A testament to essential humanity.