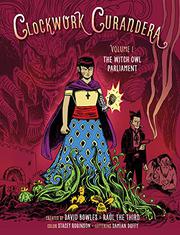 From the Clockwork Curandera series, volume 1

Mix Fullmetal Alchemist with steampunk in a fictionalized version of 19th-century Mexico, and you have Bowles and Raúl the Third’s new graphic series.

It’s 1865, and Cristina Franco is an apprentice curandera, or healer. The witch owls lay siege to the East Laredo train depot in the Republic of Santander, where she awaits her brother Enrique’s return, and despite the best efforts of her green magic, she is fatally wounded. All is not lost, however, as Enrique has been studying alchemy and engineering while he was away at university. He uses his new skills to bring Cristina back and creates mechanical limbs for her. Yet Cristina struggles with this blasphemy, knowing it will result in her expulsion from her curandera community just as the witch owls are rising to terrorize Santander. The pace is fast and clipped, with little time for worldbuilding; even brief flashback scenes can cause more confusion than clarity. Nevertheless, the combination of steampunk and cyberpunk genres in such a novel setting will appeal to many. Readers lacking a familiarity with the mestizo and Indigenous cultures of Mexico may be inspired to learn more in order to fully appreciate this work. Illustrated in black, red, and, occasionally, green ink on a background that mimics the sepia tones of old paper, the dramatic and expressive artwork and creative use of panels greatly enhance the reading experience.

A fast-paced genre mashup sure to find a cult following.