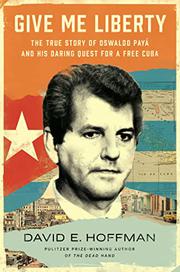 Not all resistance to the Castro regime has been offshored to Miami, as this finely detailed study of one of its leading figures demonstrates.

“Oswaldo Payá was born ten days before Fulgencio Batista seized power in Cuba on March 10, 1952, establishing a brutish autocracy,” writes Hoffman, a Pulitzer Prize–winning Washington Post reporter. When Fidel Castro came to power, Payá’s family, like so many middle-class people of the day, cheered Castro on only to see their freedoms whittled away. The author offers a well-structured overview of predecessor generations who resisted Spanish colonial rule and then American occupation, committed to a democratic country governed on its own terms. “To change masters is not to be free,” instructed Cuban intellectual José Martí, whom those earlier rebels rediscovered. In American eyes, Cuba became an outlaw nation after Castro’s revolution, when it aligned itself with the Soviet Union. Enter Payá again, who courted trouble as a teenager protesting the Soviet invasion of Czechoslovakia. “Oswaldo Payá was no hippie,” writes Hoffman, “but in his own mind he was a rebellious outsider.” In time, he blossomed as both an engineer responsible for important technological advances in medical equipment and as a dissident, the author of a popular petition that issued demands for civil liberties to the Castro regime. Dogged by the secret police, Payá nonetheless struggled to build a united front of democratic resistance only to watch it splinter into factions, partly owing to his own stubborn insistence on strategic matters. “Oswaldo saw value in everyone working in the same direction,” writes the author, “but not in compromising his vision. He was strong-willed, and so were they.” Payá died in a mysterious car wreck soon after, in 2012. However, as Hoffman notes, his legacy lives on in the form of a new generation of homegrown opponents to Cuba’s totalitarian regime.

A welcome study of political resistance by figures unknown to most readers outside Cuba.