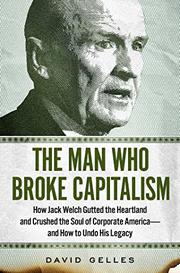 THE MAN WHO BROKE CAPITALISM

A deconstruction of a famed mogul’s harmful influence on American business.

Gelles, the “Corner Office” columnist for the New York Times, focuses on Jack Welch (1935-2020), CEO of GE from 1981 to 2001, whom he sees as “the personification of American, alpha-male capitalism, a pin-striped conquistador with the spoils to prove it.” Welch joined GE in 1960 after completing a doctorate in chemical engineering, soon rising through the company’s ranks. Notoriously “impatient, impulsive, and crass” as well as ambitious and energetic, when he took over as CEO, he lost no time inaugurating his vision—and that of economist Milton Friedman—of “maximizing profits at the expense of all else.” GE had been known as a caring company that gave its workers exceptional benefits. Welch shattered that reputation, enacting massive layoffs, carrying out extensive mergers and acquisitions, and turning GE into “a giant unregulated bank.” When Welch ascended at GE, writes Gelles, “half of GE’s earnings came from businesses dating back to the Edison era: motors, wiring, and appliances. Yet Welch, an extremist in all he did, drastically overcorrected. Instead of trying to fix American manufacturing, he effectively abandoned it, and would soon start shuttering factories around the country and shipping jobs overseas.” His influence was far-reaching. By the time he retired, 16 public companies were run by men “who had studied at his knee.” However, remarked a Goldman Sachs board member, “they were just cost cutters. And you can’t cost-cut your way to prosperity.” Gelles capably traces GE’s downfall from being the most valuable company in the world in 1993 to its begging for a bailout in 2008, and he exposes the many business titans who followed Welch’s strategies. He sees hope, however, in the “handful of idealistic capitalists”—leading businesses such as Unilever, PayPal, Patagonia, and Seventh Generation—who consider their companies’ impacts on employees, the environment, and society.

A vigorous argument for a more humane capitalism.