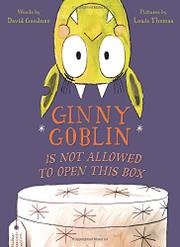 GINNY GOBLIN IS NOT ALLOWED TO OPEN THIS BOX

She may not be allowed to, but the eponymous green-skinned, overalls-clad monster thinks of many magnificent, creative ways to open that box before dinnertime.

Ginny’s large head sports huge, white eyes with long, dark lashes, a cheerful, two-fanged grin, and two pointy ears—one of which is torn. In other words, she is undoubtedly a nonharmful sort of goblin. After the text makes it clear that Ginny is not allowed to open the box until dinnertime—but “she really wants to know what’s inside”—it asks, “What if we put the box way up on a shelf?” Next, readers learn the many (often absurdly hypothetical) things that Ginny Goblin is not allowed to do in order to reach the box, including using a rope and a grappling hook or building a catapult or poking at “scaly, scary serpents” in a “murky moat.” Needing to wait until dinnertime strikes a familiar chord with this age group and becomes an appropriate refrain. Lighthearted, cartoony artwork mostly supports the text’s tongue-in-cheek tone, leading to laughs about the outlandish suggestions. However, slapstick images of Ginny’s body slamming against a stone tower and, later, Ginny clobbering serpents may strike many as unnecessarily violent. Suspense builds when Ginny temporarily turns her attention away from opening the box. The closure of knowing what’s inside is supplemented by a punchline well understood by children who have been given boundaries by adults.