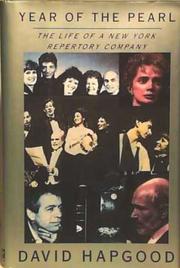 YEAR OF THE PEARL

The Life of a New York Reportory Company

Hapgood (coauthor, Monte Cassino, 1984, etc.) indulges his love of theater by dogging the steps of Shepard Sobel, artistic director of Manhattan's Pearl Theatre, during the company's 1991-92 season. Founded in 1984 and currently ensconced in a 72-seat theater in the way-Off-Broadway Chelsea district, the Pearl cleaves to a kind of college-theater idealism, dedicated to sustaining a small resident company of actors (paid $180 a week) and focusing on the classics (``We try to take the audience to the playwright, not the playwright to the twentieth century,'' says Sobel). So the 1991-92 season kicks off with Moliäre's Tartuffe, followed by such box- office inflammables as Euripedes' The Trojan Women and Ibsen's Ghosts—clearly, it will be no sleigh ride meeting the $380,000 budget. To make matters worse, the Pearl's chief fund-raiser dies of AIDS, and artistic problems arise during rehearsals of Tartuffe, particularly with two actors who don't get along with Sobel. The author interviews everyone connected with the show, including Sobel's wife, Joanne Camp, who plays Elmire in Tartuffe, not to mention leads in many other Pearl productions—a fact that produces considerable enmity between her and other female company members. Along the way, Hapgood is surprised to find how intelligent the actors are...and how noble, what with their meager bag lunches. As it turns out, the season yields mixed reviews from the critics (who in turn get drubbed here) and comes in slightly under budget. Only theatrical novices and wannabes will be enlightened by Hapgood's take on life as it really is for theatrical professionals. What's more, the author has stars in his eyes, so none of the significant questions are asked—above all, what purpose does the Pearl really serve? (Sixteen pages of photographs- -not seen)