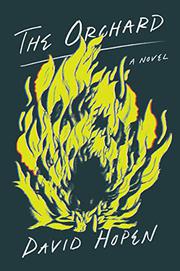 When protagonist Ari Eden leaves his bland life in Brooklyn—where he never felt deeply rooted—for a glitzy, competitive Modern Orthodox day school in the Miami suburbs, both readers and Ari himself are primed to expect a fish-out-of-water narrative. And indeed, Ari finds that his new classmates, though also traditionally observant by many standards, enjoy a lifestyle that is far more permissive than his own (a shade of Orthodoxy that is known as “yeshiva”). Suddenly Ari’s modest, pious world is replaced with a Technicolor whirlwind that includes rowdy parties, casual sex, drinking, drugs, and far more liberal interpretations of Jewish law than he has ever known. With its representation of multiple kinds of traditional Judaism, Hopen’s novel is a refreshing corrective to the popular tendency to erase the nuanced variations that exist under the umbrella of “Orthodoxy.” It also stands out for its stereotype-defying portrayal of Ari and his friends as teenagers with typical teenage concerns. But this is not just a novel about reorienting oneself socially or even religiously; though Ari’s level of observance certainly shifts, this is also not a simple “off the derech” (Jewish secularization) narrative. Ari’s new friend group, particularly its charismatic, enigmatic leader, Evan—a sort of foil for Ari—pushes him to consider new philosophical and existential norms as well as social, academic, and religious ones. The result is an entirely surprising tale, rich with literary allusions and Talmudic connections, about the powerful allure of belonging. This novel will likely elicit comparisons to the work of Chaim Potok: Like Potok’s protagonists, Ari is a religious Jew with a deep passion for literature, Jewish texts, and intellectual inquiry, and as in Potok’s fiction, his horizons are broadened when he encounters other forms of Orthodoxy. But Hopen’s debut may actually have more in common with campus novels like Donna Tartt’s The Secret History and Tobias Wolff’s Old School; its narrator’s involvement in an intense intellectual community leads him down an unexpected path that profoundly alters his worldview. The novel suffers due to its lamentably one-dimensional, archetypal female characters: the tortured-artist love interest, the ditsy blond, the girl next door. Hopen’s prose, and the scale of his project, occasionally feels overindulgent, but in that sense, form and content converge: This stylistic expansiveness is actually perfectly in tune with the world of the novel. Overall, Hopen’s debut signals a promising new literary talent; in vivid prose, the novel thoughtfully explores cultural particularity while telling a story with universal resonances.

A captivating Jewish twist on the classic American campus novel.