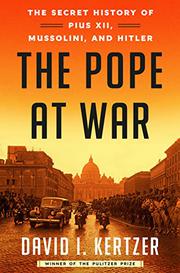 THE POPE AT WAR

The Secret History of Pius XII, Mussolini, and Hitler

A deeply troubling indictment of the cautious pope who acceded in 1939 and remained “neutral” during the Fascist and Nazi wartime regimes.

In this meticulously researched book, historian Kertzer, who has written extensively on modern papal history (The Pope and Mussolini, The Popes Against the Jews, etc.), makes good use of newly opened wartime archives, sealed since Pius XII’s death in 1958. The evidence of Pius’ silence in the face of repeated calls to stop the atrocities against the Jews and others by the Nazis and Fascists is absolutely damning. Eugenio Pacelli had been Pius XI’s loyal secretary of state, and he spent considerable time appeasing the Nazis since they came to power in 1933—e.g., engineering a concordat with Hitler. Pius XI, who in the early years of his papacy helped Mussolini solidify his dictatorship, eventually became alarmed with the Italian dictator’s ever tightening embrace of the Nazi regime and was indeed becoming outspokenly problematic for the two closest Axis powers. When Pius XI died in February 1939, the ever cautious, scholarly, German-speaking Pacelli became pope—and the best ally the two dictators could hope for. Throughout World War II, he maintained a timorous disposition in the face of their increasing aggression—Kertzer reminds us that “Hitler had long viewed the Duce as his role model”—despite the piles of documentation that reveal how he was frequently informed of the brutalities committed by the Nazis and their willing collaborators. During this time, countless victims beseeched him to stand up and do something as a moral leader. The pope, casting himself as a peacemaker, managed to play his cards skillfully even when the Allies invaded and took pains not to bomb the Vatican. As a result, the institution of the Catholic Church emerged largely unscathed from the war, effectively scrubbing clean its Fascist and Nazi collaboration. Kertzer is to be commended for bringing it all to light in page-turning fashion.

A riveting history and valuable lesson for our time about the perils of neutrality.