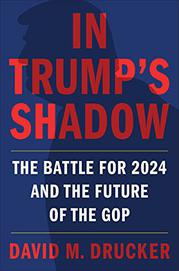 The Battle for 2024 and the Future of the GOP

The GOP is Trump’s plaything. But is he the only presence on the playground?

Washington Examiner senior correspondent Drucker doesn’t mean to read the tea leaves—so he suggests, anyway—as much as he wants to lay out possible scenarios to game the next electoral cycle and beyond. Trump has been making dark noises about running again, seeking revenge for his humiliating defeat. (The author allows that there are far too many people who don’t acknowledge that defeat, though, reading between the lines of a Mar-a-Lago conversation with him, Trump himself seems to have accepted the fact.) But then, Drucker writes, every other person positioning for a race “will be running as the next Trump,” so much so that his presence is hardly required. One of them is the Arkansas junior senator, Tom Cotton, groomed by Mitch McConnell to take a leading role in the Republican Congress and a person who amounts to what “a sophisticated version of Donald Trump [might] have looked like.” Cotton is definitively on track for a presidential run—if not in 2024, then in the years beyond. Never mind that he has absolutely no charisma. As Drucker writes, “he just doesn’t give a shit,” a quality that too many voters admire. The author also looks at Nikki Haley, the South Carolina governor who dared resist Trump even while working for him; Chris Christie, the sometime Trump confidant; Florida Gov. Ron DeSantis, who “is already running for president, if you ask most Republicans,” waging a ceaseless culture war on the non–QAnon contingent; and of course Ted Cruz, who just won’t go away. Drucker even includes the Trump family among the contenders, though he reckons that it’s Don Jr., who has been busily building networks among the Republican establishment that his father scorned, who is most likely to enter the field.

For those laying odds on 2024, Drucker delivers an opinionated, well-reasoned, and often depressing score card.