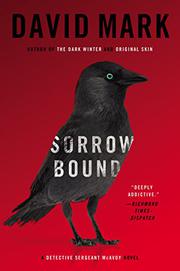 An introspective detective’s involvement in a series of brutal crimes is both professional and personal.

DS Aector McAvoy is a shy but physically impressive Scot with a Romany wife. Many of his colleagues are angry with him for bringing down a dishonest cop, and he’s been required to attend six sessions with a police-approved counselor. The sessions are not going well, but Detective Superintendent Trish Pharaoh, McAvoy’s boss at Serious and Organized Crime, still has complete faith in him. Half the unit is investigating the violent escalation in crime linked to a mysterious new group taking over the drug trade in and about Hull. McAvoy and Pharaoh, in the other half of the unit, are on the trail of a serial killer. They suspect the killings are revenge for what the killer considers a miscarriage of justice. Sebastien Hoyer-Wood, a well-connected young man, had committed a series of violent rapes he forced the victims’ families to watch. But when he was caught, his college friend, now a psychiatrist, managed to get him committed to a posh mental home rather than jail. Now a number of people who saved Hoyer-Wood’s life when he was severely beaten by a victim’s husband become targets of the killer. Using blackmail as a tool, the drug kingpin meanwhile catches several police officers in his web. McAvoy himself becomes a target when his wife, Roisin, beats up a dealer who is attacking a friend accidentally in possession of some drugs and takes the money the dealer initially offered as a bribe before he lost his temper. Even though he and his family are is serious danger from the enigmatic drug kingpin, McAvoy can’t let go of the complicated murder case.

Compelling characters and a knotty mystery make the third from Mark (Original Skin, 2013, etc.) stand out from other procedurals.