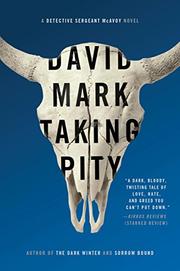 Everyone in Detective Superintendent Trish Pharaoh’s meeting in London is abuzz over the Headhunters, which aims to take control of all criminal activities now being led by smaller regional groups. So far they’ve succeeded in making offers no crime boss could refuse—and any who did refuse died horrible deaths. But the Headhunters haven’t been able to convince 81-year-old Francis Nock and his enforcer, Raymond Mahon, who’ve run a criminal enterprise in the Hull area since before most of the upstarts were born. Pharaoh is most concerned about the welfare of her friend DS Aector McAvoy, who’s living in a small room with his son. His wife, Roisin, and their baby daughter have been hidden away ever since their house was blown up and Aector was attacked and left for dead by someone with a major grudge, perhaps an angry drug dealer. At the conference, Pharaoh is approached by a woman from the Home Office who insists she get McAvoy, still on sick leave and lost without Roisin, to take a job investigating a multiple murder case from 50 years earlier. Originally declared insane, the presumed killer is now considered fit for trial, and McAvoy is supposed to look into the case and see if there’s enough evidence to go ahead. Hardworking and honest, McAvoy is still widely hated by some of his fellow police officers for bringing down a crooked but popular copper. He soon learns that not only has much of the decades-old evidence vanished, but there’s a chance someone else committed the crime. As the Headhunters fight for dominance with help from crooked cops, Pharaoh and McAvoy discover almost too late that their cases are intertwined and more than one villain is eager to see them both dead.