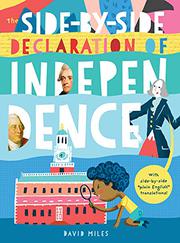 THE SIDE-BY-SIDE DECLARATION OF INDEPENDENCE

From the Great Documents Collection series

In 1776, some of the most respected men in Great Britain’s American Colonies signed the Declaration of Independence, a revolutionary—but not necessarily transparent—document.

Although the declaration is one of the key documents of American history, its sometimes-archaic language may mystify young citizens of the 21st century. After a few pages of introductory information that describes the conflicts faced by colonists before the Revolutionary War, this effort presents the declaration line by line, explaining the concepts, defining confusing words and ideas, and illuminating the intent of the signers in the context of the time. Occasionally, in sections headed “Think Deeper,” the author asks pointed, thoughtful questions on a variety of issues that have never been fully resolved in the past 245 years, without devolving into revisionist history. The format places original text on verso with the translation on recto, but clever design keeps readers engaged. The double-page spreads are neatly laid out, many including portraits of Founding Fathers presented against appealing, brightly colored backgrounds that vary from spread to spread. A variety of maps, cartoon characters, and period illustrations extend the text. With a reading level appropriate to the upper grade schoolers who are often introduced to this tumultuous period of history, this engaging and surprisingly entertaining effort seems like the perfect choice to accompany and expand lesson plans. (This book was reviewed digitally.)