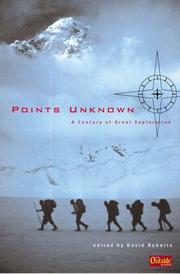 A Century of Great Exploration

A noted writer on the great outdoors, working under the aegis of Outside magazine, here assembles 20th-century exercises in adventure—and not, in the main, the fit-for-stockbrokers, pricey, high-tech, gear-laden adventure in which that magazine trades. Many of the pieces are set at the poles (e.g., an excerpt from Ernest Shackleton’s The South) or on high mountains (e.g., a passage from Peter Boardman’s hair-raising epic The Shining Mountain), where the chances for headline-making disaster are rife. Others, set in more temperate zones, include excerpts from such classics as Redmond O’Hanlon’s hilarious Into the Heart of Borneo and Bertram Thomas’s remarkable Arabia Felix. The literary quality of the selections is generally high, and it’s refreshing to see such fine but now overlooked writers as Wilfred Thesiger and Laurens van der Post set alongside bestselling newcomers like Jon Krakauer and Sebastian Junger. But there are also obvious flaws. For one thing, the anthology includes almost no work by women, who, it would appear, had no adventures in the 20th century; Roberts’s apology for this editorial slight is unconvincing, and he lets slip a telling complaint that goodies like GPS systems and four-wheel-drive vehicles “run the risk at times of emasculating adventure.” Unconvincing, too, is his explanation why the book contains only work originally published in English: Roberts holds that it’s impossible for any one person to keep up with the world’s adventure literature—but he also admits to having been vetted by a board of 16 other writers and editors, which makes the evasion just a little unseemly.

Still, Roberts’s anthology has its virtues, and readers will find plenty to enjoy.