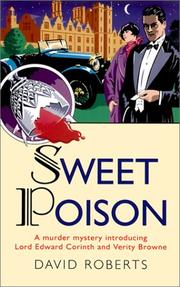 The Duke of Mersham’s dinner party has not been going well. His younger brother, car enthusiast Edward, invited to partner Hermione, poisonous stepdaughter of newspaper baron Lord Weaver, has not arrived by the time dessert is served, and the other guests are struggling to tolerate one another. Pacifist bishop Cecil Haycraft can barely abide WWI hero General Sir Alistair Craig VC, and Hitler confidant Helmut von Friedberg and rising conservative politician Peter Larmore are no more inclined to tabletop diplomacy than echt capitalist Lord Weaver. When Edward finally arrives after a car collision, he’s hitched a ride with darling Verity, who is—gosh—a reporter for the Daily Worker. They’ve barely sat down to eat when the general sips his port, turns blue, and dies from cyanide poisoning. Why murder the general when he was terminally ill with cancer? Perhaps the general himself meant to kill someone else, but incontinently reached for the wrong glass. Edward and Verity, in an odd-couple pairing, sort through motives and means, though they’re briefly sidetracked by communist party politics; von Friedberg’s recall to Berlin; a few torch songs offered by Lord Weaver’s “protégé”; and the near-death of Hermione, found next to the body of her drug supplier. There will be more fatalities and more scandals unearthed before Edward drives off in his newly repaired Lagonda automobile and the fetching Verity refuses party demands that she report to fascist Spain.

Despite much political blather, a rather conventional debut whodunit—the first in a series—with ample misdirection but not much depth.