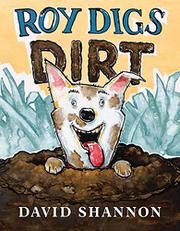 Who can blame him? Sitting, rolling around, and lying in dirt make him happy because dirt is so deliciously…well, dirty, and Roy loves being dirty. Eating, sniffing, watching, and listening to dirt are fantastic. Roy likes burying and unearthing cool, fun stuff in dirt, including some crawly critters and an imaginary friend, likewise named Roy. Surprisingly, there are things Roy doesn’t dig about dirt, though: ants and mud. You see, rain makes mud, or “dirt gravy.” Mud by itself is terrific; unfortunately, mud plus Roy equals very dreaded baths. Roy. Doesn’t. Dig. Baths. What does Roy dig when there’s no dirt around? Rugs, blankets, and newspapers suffice until he enters the jungle that is the backyard. Sadly, encounters with smelly trespassers could occur there, and—yep—baths might ensue! Still, all is well for Roy as he awakens each morning to a day filled with new dirty adventures. This is a rollicking story that will especially resonate with readers who are unapologetically messy. They’ll revel in the delights of wallowing in grunge and may themselves sympathize with a bath-averse protagonist. Shannon’s illustrations are comically energetic, and Roy’s expressions are hilariously wild-eyed, tongue-lolling, and frenzied. Roy’s white coat helps keep the focus on dirty patches.

Here’s the dirt on this one: Kids will dig it.