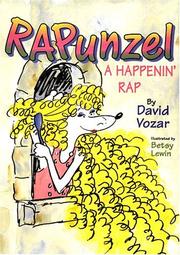 The team behind Yo, Hungry Wolf! (1993) brings forth a rap retelling of Rapunzel. All the characters are dogs in this blithe version, but that's not the only change. Rapunzel's father dumps his marshmallow ice cream all over the witch until she looks like ``a humongous s'more.'' She takes his baby, who grows into the most whiny and demanding of teens, a long-nosed pup with a cascade of golden tresses. Fine Prince, a dog with attitude and a green mohawk, spies Rap from her highrise window, but is at first put off both by Rap's self-involvement and the presence of the witch. He gets to her room by the traditional route. The witch literally explodes, and all is well as Rap opens her own beauty salon, bears Fine Prince twins, and sports a crew cut. The rhyme is bouncy with a solid beat; Lewin's expressive black lines and wild doggy outfits are a good match for the words. (Picture book. 4-8)