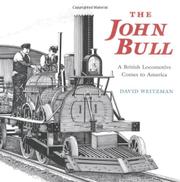 A British Locomotive Comes to America

Weitzman, author of Locomotive: Building an Eight-Wheeler (1999) and other celebrations of the glories of big, intricate machines, offers a new set of explicitly detailed, finely drawn portraits, cutaways, and schematics—all featuring an 1831 steam engine imported by business visionaries to carry passengers and freight along one leg of the journey between Philadelphia and New York City. Writing in present tense, he follows each major part of the device, from foundry to mill to final assembly—it arrived in America in pieces, with no instructions—and on to later enhancements, such as the cowcatcher and a cabin for the crew. As one of the first locomotives in this country, the John Bull became a model for later designs, and so well was it built, that only minor repairs were necessary before its curators at the Smithsonian Institution fired it up on the 150th anniversary of its arrival here. Budding machiniacs, as well as young students of the Industrial Revolution or railroading’s earliest days will echo the author’s delight at this astonishing tale of enterprise and ingenious engineering. (Nonfiction. 8-12)