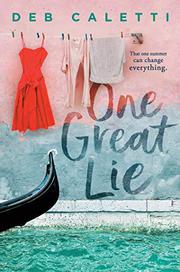 Budding writer Charlotte Hodges has a dream: “to say something that says something.”

She gets the chance when she spends the summer under the guidance of her idol on his private island in the Venetian Lagoon. Luca Bruni is a kindred spirit: His semiautobiographical writing speaks directly to 18-year-old Charlotte’s personal pain. At first, Bruni is charming and brilliant—as Charlotte always expected. Reality creeps in as his true nature slowly emerges: He’s a middle-aged, arrogant snob hiding serial lechery behind a mask of empty, performative feminism while preying on the young women who attend his sought-after summer program. Charlotte’s dreams crumble when this powerful man who can make or break a writing career sets his sights on her. Third-person–present narration foreshadows the dreadful events to come, giving the story a fairy-tale tone and inspiring readers to absorb every luminous detail as the narrative slows down to describe Venice in gorgeous, flowing prose. Each chapter is prefaced with information about a female poet from the Italian Renaissance who, despite her accomplishments, has been forgotten or is only remembered for her connection to a man. In a subplot, Charlotte investigates one such woman, an ancestor who may have penned a famous poem claimed by her lover as his own. Readers won’t miss the parallels between this woman’s life and what is happening to Charlotte in the present. Most characters are assumed White.

A potent story of how one young woman finds the power to write her own story.