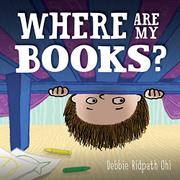 WHERE ARE MY BOOKS?

When young Spencer’s beloved books begin to disappear, the boy devises a plan to catch the culprit (although not before suspecting his toddler sister).

Muted shades of purple, blue and pale green are the background colors for the appealing opening, in which Spencer—in narwhal-themed red pajamas—is cuddled up with his mother, stuffed narwhal toy tucked under his arm; his and his mother’s wide, comic-strip eyes focus on an open book. “Spencer loved books. His favorite bedtime book was Night-Night, Narwhal. Sometimes he read it aloud.” No doubt it’s the kind of read-aloud done by 4-year-olds who’ve heard their favorite story many times. When Night-Night Narwhal disappears, Spencer’s father reads him Tenacious Todd, but it doesn’t quite work for bedtime: “But Todd was a toad, and toads were amphibians, and amphibian books were supposed to be for right-after-lunch story time.” The humor and charm continue as more of Spencer’s books, which he keeps so carefully on his shelf, begin disappearing—even Send in the Clown Fish! Astute readers will notice tulip petals and screws replacing the confiscated codices. Although the thief’s identity may be suspected, no one will expect the funny, sweet and original ending. Fans of Mo Willems will especially appreciate the family dynamics and expressive artwork.

The brilliant combination of art and text will capture the imaginations of both bibliophiles and less-than-enthusiastic readers.