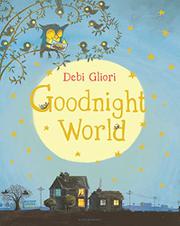 A rhyming journey around a child’s world just before bedtime.

Swooping, colorful motifs on each spread and lilting couplets invite the familiar practice of bidding goodnight to vehicles, flowers, and animals big and small that later appear as toys in a child’s bedroom. Beginning in the stratosphere, the story tours various ecological habitats before landing at last in the bedroom of a white child whose parents are settling down for bed. Unfortunately, the book’s artwork falls short of lulling readers. Importantly, penguins and sea lions are more likely to be found in the Antarctic than the Arctic, as implied here. Disjointed organization transports readers from oceans under northern lights to trains and rocket ships, from birds, bees, and deep-sea fish to a sleepy zoo. Inconsistent scale and proportion pose further problems. What looks like a young white girl walking a dog outside soon disappears, while inside the house a few page turns later is a white woman reaching for the child (perhaps she is mother?), with the same dog curled up nearby. Additionally, the text, though at times endearing (“Goodnight lights above, aglow”), at other times hiccups a bit (“Goodnight moon, goodnight sun. / Goodnight, goodnight, to everyone”). Uneven meter and unclear meaning interrupt an otherwise soothing read-aloud.