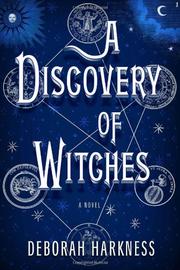 A DISCOVERY OF WITCHES

From the All Souls Trilogy series, volume 1

Harry Potter meets Lestat de Lioncourt. Throw in a time machine, and you’ve got just about everything you need for a full-kit fantasy.

The protagonist is a witch. Her beau is a vampire. If you accept the argument that we’ve seen entirely too many of both kinds of characters in contemporary fiction, then you’re not alone. Yet, though Harkness seems to be arriving very late to a party that one hopes will soon break up, her debut novel has its merits; she writes well, for one thing, and, as a historian at the University of Southern California, she has a scholarly bent that plays out effectively here. Indeed, her tale opens in a library—and not just any library, but the Bodleian at Oxford, pride of England and the world. Diana Bishop is both tenured scholar and witch, and when her book-fetcher hauls up a medieval treatise on alchemy with “a faint, iridescent shimmer that seemed to be escaping from between the pages,” she knows what to do with it. Unfortunately, the library is crammed with other witches, some of malevolent intent, and Diana soon finds that books can be dangerous propositions. She’s a bit of a geek, and not shy of bragging, either, as when she trumpets the fact that she has “a prodigious, photographic memory” and could read and write before any of the other children of the coven could. Yet she blossoms, as befits a bodice-ripper no matter how learned, once neckbiter and renowned geneticist Matthew Clairmont enters the scene. He’s a smoothy, that one, “used to being the only active participant in a conversation,” smart and goal-oriented, and a valuable ally in the great mantomachy that follows—and besides, he’s a pretty good kisser, too. “It’s a vampire thing,” he modestly avers.

Entertaining, though not in the league of J.K. Rowling—or even Anne Rice. But please, people: no more vamps and wizards, OK?