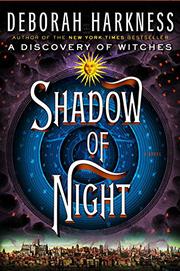 From the All Souls Trilogy series, volume 2

Well, not exactly. But, thanks to the magic of time travel, Harkness’ (A Discovery of Witches, 2011) latest finds witch and Oxford professor Diana Bishop and her lover, scientist and vampire Matthew Clairmont, at the tail end of Elizabethan England, when Shakespeare’s career is about to take off. There, by happenstance, they meet Christopher Marlowe, who commands an uncommonly rich amount of data about the ways of the otherworld. Asked why the odd couple should attract attention, he remarks matter-of-factly, “Because witches and wearhs are forbidden to marry,” an exchange that affords Diana, and the reader, the chance to learn a new word. Diana and Matthew talk a lot. They argue a lot, too, quibbling about the strangest things: “ ‘You are a vampire. You’re possessive. It’s who you are,’ I said flatly, approaching him in spite of his anger. ‘And I am a witch. You promised to accept me as I am—light and dark, woman and witch, my own person as well as your wife.’ ” But then they get to have extremely hot—indeed, unnaturally hot, given the cold blood of the undead—makeup sex, involving armoires and oak paneling and lifted petticoats and gripped buttocks. Meanwhile, Kit Marlowe gets to do some petticoat lifting of his own, even if his adventures lead him to a Bedlam populated by all kinds of unfortunate souls, from a few ordinary wackaloons of yore to a small army of daemons, witches, vampires and other exemplars of the damned and doomed. Will Shakespeare comes onto the scene late, but there’s good reason for that—and maybe a little fodder for the Edward de Vere conspiratorial crowd, too. Clearly Harkness has great fun with all this, and her background as a literature professor gives her plenty of room to work with, and without, an ounce of pedantry.

Sure, the premise is altogether improbable. But, that said, there’s good fun to be had here, even for those who might wish for a moratorium on books about vampires, zombies, witches and other things that go bump in the night.