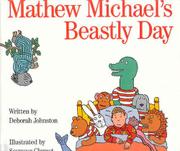 When Mathew Michael wakes up, he feels (and, in Chwast's boldly outlined picture, looks) like a sloth; at breakfast, he's a hungry bear; then he's a timid rabbit boarding the school bus, a tyrannosaur who gets in trouble on the playground, and so on- -until he becomes a boy ready for tucking in and an animal story. It's a simple but winning idea—if somewhat overextended in Johnston's first book—but Chwast's vivid colors and imaginative embellishments (including a bedroom full of toys representing the animals whose shapes the boy has assumed) command attention while adding a lot to the fun. (Picture book. 4-8)