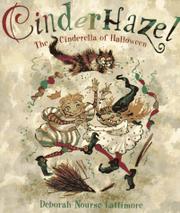 The Cinderella of Halloween

Cinderella meets Halloween in a twist on the old story, in which Lattimore (The Fool and the Phoenix, p. 951, etc.) capitalizes on dirt and the assumption that children revel in it. Cinderhazel and her broom-wielding stepsister-witches await the Witches' Halloween Ball. When the stepsisters command her to stop sweeping and go fly a broom, she retorts, ``This is what I'm good at! D-I-R-T!'' Her witchy godmother persuades her to go to the ball by tempting her with 15 filthy fireplaces at Prince Alarming's palace and changing her cracked broom into a smoke-spewing, high-flying vacuum cleaner. The more dirt the better is the slogan at the heart of this one-joke story, whose humor relies on mess rather than magic. Mutual love of dirt is what unites this ornery witch with her dirtball prince and they live ``filthily ever after.'' The feverishly smudged illustrations depict look-alike potato-faced witches amidst a constant swirling tornado of witch hats, brooms, soot, spiders, and party decorations. (Picture book. 5-8)