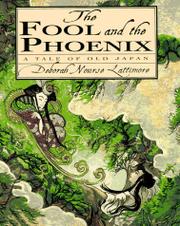 THE FOOL AND THE PHOENIX

A Tale of Old Japan

In this original tale of a mute birdcatcher who nets a phoenix and saves his village from a bandit, Lattimore (Arabian Nights, 1995, etc.) shows little of the zeal for authenticity and depth of research that characterize her other works. In feudal Japan, the shogun has threatened to burn down a village he believes is harboring his stolen treasure. Hideo, the birdcatcher, sees a scar on a passing bandit's forehead and an identical one on Nobu, head of the village council, but fails to connect the two until after he frees and falls in love with a phoenix, and then performs several random good deeds. After trying to kill Hideo—who is speechless and unable to defend himself—for the thievery, Nobu hears the phoenix's accusation and instantly confesses all. Hideo and the phoenix disappear into a tree and are last seen, many years later, flying off wing in wing (though the illustration depicts an odd, birdlike creature with two heads on a single body). The intricately brushed scenes are backed by foamy trails of dingy-looking mist to go with the heavily contrived plot. A somewhat superficial background note is appended, which wrongly implies that the legend of the phoenix is a Japanese story, when it is actually found in many cultures. (Picture book. 7-9)