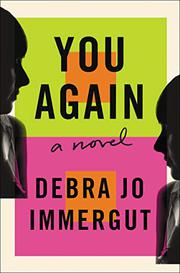 Abigail Willard, 46, is heading home to Brooklyn after a long day at her job as art director at a pharmaceutical company when she spies her 22-year-old double at a pay phone near the Holland Tunnel. She leaps out of her taxi to get a better look only for the girl to hail the cab and disappear. Abby doesn’t mention the incident to her husband, Dennis, or her sons, Pete and Benjamin; it was dark and rainy and she was probably just tired. Then, several days later, she happens upon her younger self reading on a bench outside a library she used to frequent—and the encounters only escalate from there. Is Abby hallucinating? Is the figure a friendly ghost of sorts, meant to remind the former painter of the dreams she abandoned? Or is this a chance for Abby to prevent whatever tragedy caused her to forget a year of her 20s? Meanwhile, Dennis fears he’ll be fired, and 16-year-old Pete becomes involved with an increasingly violent group of antifa activists, earning him—and Abigail—the attention of a handsome police detective. Although an unidentified individual’s quest to solve “the many mysteries about Ms. Willard’s role in the deadly events of 2015” forms the book’s frame, Immergut allows the bulk of the tale to unfold via Abby’s journal. Her entries are evocatively written, keenly self-aware, and peppered with artful observations that lend the story texture, vibrancy, and depth.

At once a mind-bending puzzle and a profound meditation on love, fate, ambition, and regret.