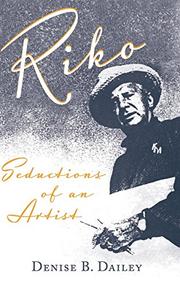 Seductions of an Artist

by Denise B. Dailey

When Dailey (Listening to Pakistan, 2013) first met Riko, at a friend’s recommendation, the artist was already 80 years old and nearing the end of his life. “The works of Mikeska give you joy,” summarized an art critic writing in 1936, yet today he’s barely known. Fascinated by Riko’s powerful personality and Greta’s need to tell their story, Dailey began recording their chats and, over 20 years, gathering accounts from the couple’s friends. The saga is amplified with photographs, some in color; curious readers can visit an associated website (https://flic.kr/s/aHsm7mkkSL) for more. Born in the industrial town of Vitkovice, Moravia, in 1903, Riko painted and studied in cities like Vienna, Berlin, and Paris, living mainly in Prague. He married Greta, an artist, illustrator, and teacher, in 1929. With Greta later in danger because of her Jewish ancestry, the couple escaped Prague and the Nazis for Britain. After 10 years in that country, Riko and Greta moved to New York City, where they lived until their deaths (in 1983 and 1998, respectively). Despite Riko’s promising early career, his work gained little notice after he emigrated. Dailey draws out the many captivating strands in Riko’s personality: his skill as a teacher, his ability to win friends, his highly developed sense of injustice, his hatred of self-promotion, and his perfectionism. These last two traits could be self-destructive; he’d overwork paintings, sell them for too little, or refuse to offer them at all, though money was always an issue. Dailey describes all this with verve and insight, as when discussing Riko’s palette. "Riko’s love for André Derain and Maurice de Vlaminck, both leaders of the Fauves movement, was as intense as their colors—pigments unseen (but yearned for) in the chiaroscuro of Riko’s coal-scrimmed youth,” she writes in a nice passage. Greta’s story, too, is well-represented, making this nearly a dual biography: her birth in 1900; her moneyed upbringing, being tutored by the likes of Kafka and Max Brod; her first marriage; and her struggles to earn a living and guard her husband’s legacy.