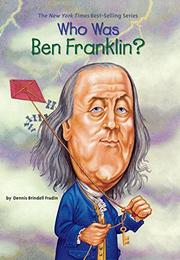 WHO WAS BEN FRANKLIN?

Benjamin Franklin “snatched the lightning from the sky and the scepter from tyrants” and his story is told here in many informative and amusing anecdotes. Among them: young, skinny-dipping Ben pulled across a pond by his kite, Ben in London proving he can swim three miles, Ben making up fake “news items” to spice up his Pennsylvania Gazette, and Ben wanting to get married in spite of his “bumpy” love life. These human-interest stories balance the better-known record of Franklin’s accomplishments as an inventor and political force in colonial America. Franklin invented the lightning rod, bifocals, the Franklin stove, and an artificial arm. He started a public library, a volunteer fire company, and a general hospital in Philadelphia. He improved the colonies’ mail delivery system and founded the Philadelphia Academy, which later became the University of Pennsylvania. Franklin helped draft the Declaration of Independence, helped secure French support for the Revolution, and helped hammer out the Constitution. His final public act was to urge Congress to end slavery. All of this and more are covered in this brief, engaging, well-written biography. Not just a birth-to-death exposition of facts, this account opens with Franklin’s catching lightning in a bottle and, by the end, has succeeded in portraying Franklin as a “man of many talents” and a flesh-and-blood person. The black-and-white illustrations, which appear on every spread, are superb, adding information and touches of humor. Readers will like the Ben Franklin they come to know in this outstanding biography. Two timelines are appended—one on Franklin’s life, and one on world events. (Nonfiction. 8-12)