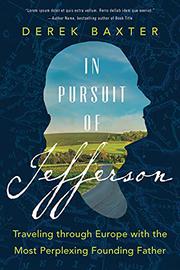 IN PURSUIT OF JEFFERSON

Traveling Through Europe With the Most Perplexing Founding Father

This jaunty, inventive approach to an old question—who was Thomas Jefferson?—turns out to be a wise, readable, and altogether satisfying work.

In his first book, Baxter relates his numerous European journeys following in Jefferson’s footsteps, guided by the Virginian’s little-known 1788 book, Hints to Americans Traveling in Europe. Accompanied by his wife and children, the author traveled through England and much of Western Europe. Voraciously curious, he visited farms, vineyards, and towns while observing, among other things, architecture, cheese making, and viticulture, all with the engaging ingenuousness of a youngster. Baxter also unhesitatingly departed from Jefferson’s Hintsto follow his guide’s itineraries in the eastern U.S. Open to everything, the author remained full of good humor—until, with growing discomfort, he realized that the life and ease of his guide and hero was at every turn built on slavery. Consequently, this often chatty, light-spirited book about a citizen scientist turns into a somber reflection on the contradiction at the heart of American history. Readers shouldn’t expect the measured gravity of the Odysseyor the bite of Paul Theroux’s travelogues. This is travel writing in a different mode: chatty, sometimes corny, unfailingly warmhearted. Baxter’s earnestness, most evident in his encounters with the people that he met along the way, was always grounded in a serious purpose—to see and learn what Jefferson saw and learned. The author also takes on another aim: to figure out how to make sense in the early 21st century of a slaveholding author who wrote a world-historical testament to freedom. Here, Baxter, his easy nature sobered, is at his honest and most candid best. What’s particularly refreshing is that he captures his own amateur historian’s growth in knowledge, then in confusion, and finally in rueful, disenthralled acknowledgement of the inconsistencies, hypocrisy, blindness, and selfishness that existed side by side with Jefferson’s greatness.

An unusually pleasing and affecting guide to Europe through the eyes of two tourists separated by more than 230 years.