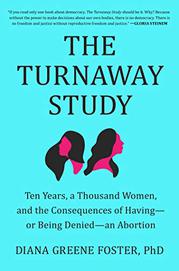 Ten Years, a Thousand Women, and the Consequences of Having—of Being Denied—an Abortion

A compelling examination of “the state of abortion access in our country and the people whose lives are affected by it.”

Foster, a professor and researcher in the Department of Obstetrics, Gynecology, and Reproductive Sciences at the University of California, San Francisco, synthesizes the findings of The Turnaway Study, a 10-year longitudinal project, involving 40 researchers, comparing the emotional, physical, and economic effects to women of having an abortion or being denied one due to a clinic’s deadline for when an abortion could be performed—a cutoff date that varied depending on the location of the clinic. The study excluded women seeking abortions because of fetal anomaly or severe health risk, which affect the timing of the decision. With much hearsay, unfounded assumptions, and strident rhetoric fueling public policy, the UCSF researchers aimed to provide scientific evidence about abortion “in the context of real women’s lives.” Beginning in 2007, the study included more than 1,000 women from diverse ethnic and economic backgrounds, recruited from 30 facilities in 21 states. From in-depth interviews conducted every six months, Foster has selected 10 women whose stories are related in their own words: white, Latina, and African American; rural and urban; some with strong family support, some facing their decision alone; women enmeshed in abusive relationships; some already mothers and some who went on to have children later; all with hopes for the future. Their candid stories are riveting, sometimes surprising, and always illuminating—as are the study’s findings. There is “no evidence that abortion hurts women,” the study concludes. “For every outcome we analyzed, women who received an abortion were either the same or, more frequently, better off than women who were denied an abortion.” To those who assume women make the decision to abort rashly, the researchers found thoughtful deliberation.

Required reading for anyone concerned about reproductive justice.