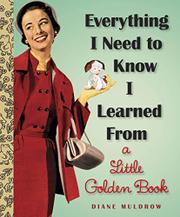 Chicken soup for fans of Golden Books, from the line’s editorial director.

Reasoning that hard times have come to America (“The chickens have come home to roost, and their names are Debt, Depression, and Diabetes”), Muldrow offers this book as palliative. She gathers single illustrations from 61 Little Golden Books and adds pithy captions as anodynes, such as “Don’t panic…” (beneath Tibor Gergely’s 1948 image of a dismayed child holding detached braids) or “Have some pancakes” (Richard Scarry, 1949). Though some of her advice has a modern inflection (“Don’t forget your antioxidants!”), the pictures all come from titles published between 1942 and 1964 and so, despite the great diversity of artistic styles, have a quaint period look. Not to mention quaint period values, from views of apron-wearing housewives and pipe-smoking men (or bears) to, with but two exceptions, an all-white cast of humans. Furthermore, despite the title’s implication, the exhortations don’t always reflect the original story’s lesson or theme; rather than “Make a budget—and stick to it!” the lad in Miriam Young’s 5 Pennies To Spend (illustrated by Corinne Malvern, 1955) actually used his hoard to help others in need.

Ephemeral—unlike the art here (some of it, at least) and those fondly remembered little books.