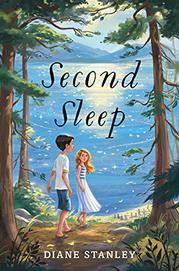 The second sleep of the night is often the sweetest.

Twelve-year-old Max’s mom has disappeared, leaving only a cryptic voicemail message saying that she’s OK and is going to help an old friend. He and his 8-year-old sister, Rosie, go with Mozelle, their maternal grandmother, to help clean out her family cabin and distract themselves. Expecting a boring week (no Wi-Fi!), Max is surprised to meet Lila, who is a fast and loyal friend, and her friends: Lenny, Dee, and shy, artistic Henry. But he realizes he only sees them when he falls into his second sleep, the period of rest after a middle-of-the-night spell of wakefulness, during which he enters into a magical dream world—or is it? Fun nights, but slow days, are interspersed with concern about his mother, as no new information comes to light about her whereabouts. Getting to know his new friends better, Max thinks he might see a link between them and his mother’s disappearance. Max’s attempts to solve his present tie directly to figuring out his mother’s past, something he cannot accomplish on his own. This is a book for those who love adventure, mystery, and journeys to self-realization. It’s a story with depth and heart, with fully fleshed out characters and, even though the opportunity is there, a delightful lack of cynicism. Characters present as White.

At once magical and rooted in reality, an engaging story of life, love, family, and heart.