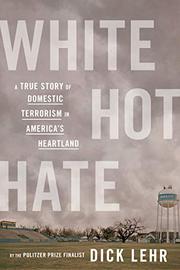 A True Story of Domestic Terrorism in America’s Heartland

How an ordinary American citizen thwarted the sinister plot of a homegrown militant hate group at the dawn of the Trump era.

Investigative journalist Lehr tells the story of Dan Day, a lifelong Kansan family man and unemployed former probation officer who, in 2015, infiltrated a local militia group as their “intelligence officer” while reporting their conspiracy plots to the FBI. In the wake of the Pulse nightclub massacre in Orlando, perpetrated by a young man who claimed allegiance to the Islamic State group, a tightly knit terrorist militia group calling itself the Kansas Security Force sought retaliation against the concentrated Somali Muslim population of Garden City. They planned to bomb an apartment building and a mosque. Using sworn testimonies, federal court documents, and more than 100 hours of Day’s hidden audio and video camera recordings, Lehr chronicles the entire ordeal with seamless ease, studding the narrative with numerous moments of taut true-crime tension. Day was fully immersed in KSF, gaining the trust of the three key “Crusaders”—Patrick Stein, Curtis Allen, and Gavin Wright—and he introduced them to “Brian,” an undercover FBI agent posing as an arms dealer. The author expertly captures these moments with vivid imagery and often frightening detail, and he clearly shows the true criminal nature of the terrorist mindset and how conspiracy plots are hatched and developed. He also profiles the lives of Somali citizens in Garden City, the refugee experience, and how that community thrives despite the ever present fear of racist violence. Lehr is a seasoned journalist whose distinguished career includes crisply probed accounts of organized crime bosses and police brutality coverups. In this report, his lucid investigative prowess once again creates a dramatic tapestry of hate, hope, and justice. He also offers a cautionary reminder about the pervasive presence of political extremism in America.

Comprehensive, riveting reportage on the enduring fight against domestic terrorism and racial violence.