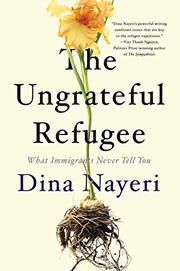 What Immigrants Never Tell You

A novelist turns to nonfiction to illuminate the refugee experience, focusing mostly on her Iranian family but also reporting the sagas of many others fleeing poverty and violence.

The word “ungrateful” in the title is intended sarcastically, even bitterly. For Nayeri (Refuge, 2017, etc.), winner of the UNESCO City of Literature Paul Engle Prize, that word signifies the misguided mindset of privileged individuals in stable nations who treat desperate refugees with suspicion, condescension, or even outright cruelty. Those unkind hosts falsely believe that refugees expect something for nothing, that maybe those fleeing to save their lives will somehow displace welfare benefits and jobs in a new land. With inventive, powerful prose, Nayeri demonstrates what should be obvious: that refugees give up everything in their native lands only when absolutely necessary—if they remain, they may face poverty, physical torture, or even death. The author, who was born during the Iranian Revolution and came to the U.S. when she was 10, grew up with her brother in a household run by her physician mother and dentist father. However, their relative privilege could not keep them safe from Muslim extremists involved in the revolution. Nayeri’s father learned to compromise his principles to get along, but her mother rebelled openly, converting to Christianity. The extremists threatened to kill her and take her children, so her mother gathered her children and fled, leaving Iran secretly via a risky route. Nayeri’s father stayed behind, eventually remarrying and starting a new family. The refugees subsisted for 16 months in squalor, mostly in a compound in Italy. Nayeri’s mother, desperately working every angle, used her wits and solid education to gain entry to the U.S. The author uses some time-shifting to unfold the narrative, which she divides into five sections: escape (from Iran), refugee camp, asylum (in the U.S.), assimilation, and cultural repatriation.

A unique, deeply thought-out refugee saga perfect for our moment.