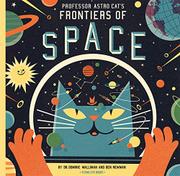 Conducted by a cat in a retro-futuristic space suit, this tour of the solar system and beyond earns style points for both its illustrations and its selection of “Factoroids.”

Diverging from the straight-line course such tours usually take, Professor Astro Cat begins with the Big Bang and the subsequent formation of stars and galaxies. In single-topic spreads, he then sails past the sun to present the Earth and moon, space travel from Apollo to the International Space Station, and the other planets in succession with their major moons and distinctive features. Going beyond the solar system, he explores constellations and telescopes and finally speculates in free-wheeling fashion about alien life and our future travels to other worlds. In blocky, mid-last-century–style cartoon pictures printed on rough paper, Astro Cat and his mouse sidekick point and comment as the smiling sun, cutaway views of spacecraft and satellites, heavenly bodies of many sorts and (toward the end) googly-eyed aliens sail past. Though claims that gas giants have a “surface” and that astronauts wear “armour to protect against flying space rocks” are, at best, misleading (and the text could have stood another round of copy editing), Astro Cat’s digestible bursts of information are generally accurate—and well-salted with memorable notes about, for instance, diamonds on Uranus or how dirty laundry on the water-poor ISS is consigned to fiery destruction in the atmosphere.

A lively jaunt over well-traveled territory.