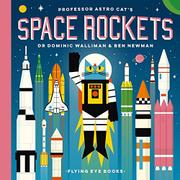 From the Professor Astro Cat series

The bubble-helmeted feline explains what rockets do and the role they have played in sending people (and animals) into space.

Addressing a somewhat younger audience than in previous outings (Professor Astro Cat’s Frontiers of Space, 2013, etc.), Astro Cat dispenses with all but a light shower of “factoroids” to describe how rockets work. A highly selective “History of Space Travel” follows—beginning with a crew of fruit flies sent aloft in 1947, later the dog Laika (her dismal fate left unmentioned), and the human Yuri Gagarin. Then it’s on to Apollo 11 in 1969; the space shuttles Discovery, Columbia, and Challenger (the fates of the latter two likewise elided); the promise of NASA’s next-gen Orion and the Space Launch System; and finally vague closing references to other rockets in the works for local tourism and, eventually, interstellar travel. In the illustrations the spacesuited professor, joined by a mouse and cat in similar dress, do little except float in space and point at things. Still, the art has a stylish retro look, and portraits of Sally Ride and Guion Bluford diversify an otherwise all-white, all-male astronaut corps posing heroically or riding blocky, geometric spacecraft across starry reaches.

Energetic enough to carry younger rocketeers off the launch pad if not into a very high orbit.