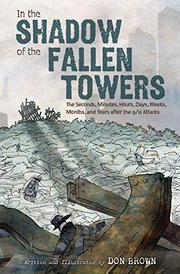 IN THE SHADOW OF THE FALLEN TOWERS

The Seconds, Minutes, Hours, Days, Weeks, Months, and Years After the 9/11 Attacks

The terrorist attack on the World Trade Center in New York City in 2001 changed our world irrevocably.

Now, 20 years later, the reverberations of this grievous assault on the United States can still be felt. Sibert Honor–winning graphic novelist Brown uses lyrical prose and powerful illustrations to revisit the horrific events of the morning of Sept. 11, 2001, and share with readers the profound and lasting effects they have had on the country and its residents. Based on the firsthand accounts of survivors, Brown chronicles some of the lesser-known stories of victims, first responders, and survivors in the days and years after the attacks. Readers will delve deeper into what they might already know about that morning as well as broaden their awareness of its harrowing aftermath. Brown’s effective use of color adds yet another dimension to the story: The panels are illustrated in shades of brown and gray, re-creating the bleak smoke- and dust-filled landscape of ground zero. Sudden bursts of violent red flames perfectly symbolize the devastating shock of the disaster and the urgent fight for survival. Extensive source notes, statistics, and citations as well as a poignant afterword make this graphic nonfiction title an important, powerful book for teen and adult readers alike.

A deeply moving account of the immediate aftermath and lasting effects of the largest terrorist attack on United States soil.