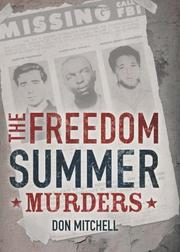 A 50th-anniversary examination of the Mississippi murders of James Chaney, Andrew Goodman and Michael Schwerner and their aftermath.

An introduction describes the legally entrenched racism of Mississippi and the inception of the Freedom Summer campaign. Following this, Mitchell drops readers right in with the events that led up to the murder of the three young men, evoking the hostility and fear that covered Neshoba County like a blanket. He pulls back to sketch the victims’ biographies in separate chapters, then takes readers through the investigation and the steps toward the 1967 trial that infamously failed to deliver justice. That account alone, illustrated with ample archival photographs and memorabilia, makes riveting reading. He clearly states the legal intricacies and thoroughly incorporates the players’ own voices, with often breathtaking effect: “They killed one nigger, one Jew, and a white man. I gave them all what I thought they deserved,” said the presiding judge later. Mitchell takes the story into the present day, describing how the families of the victims continue to fight for civil rights and how both locals and state officials kept the case alive, simultaneously working toward legal and emotional resolution. He leaves open the question whether now “the killing of a black mother’s son is as important as the killing of a white mother’s son”—but the country is getting closer to that goal. The book includes a map, endnotes, bibliographic essay, bibliography and index.