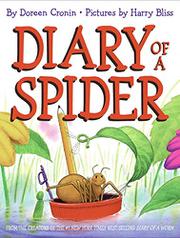 DIARY OF A SPIDER

The wriggly narrator of Diary of a Worm (2003) puts in occasional appearances, but it’s his arachnid buddy who takes center stage here, with terse, tongue-in-cheek comments on his likes (his close friend Fly, Charlotte’s Web), his dislikes (vacuums, people with big feet), nervous encounters with a huge Daddy Longlegs, his extended family—which includes a Grandpa more than willing to share hard-won wisdom (The secret to a long, happy life: “Never fall asleep in a shoe.”)—and mishaps both at spider school and on the human playground. Bliss endows his garden-dwellers with faces and the odd hat or other accessory, and creates cozy webs or burrows colorfully decorated with corks, scraps, plastic toys and other human detritus. Spider closes with the notion that we could all get along, “just like me and Fly,” if we but got to know one another. Once again, brilliantly hilarious. (Picture book. 6-8)