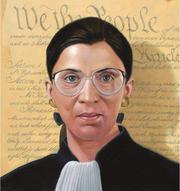 The Life of Ruth Bader Ginsburg

From the Big Words series

Ruth Bader Ginsburg witnessed and experienced discrimination, both subtle and overt, that profoundly affected her choices and the direction her life would take.

Her mother was denied many opportunities, but she was determined that Ruth would achieve independence. She died just before Ruth’s high school graduation, never seeing her daughter’s splendid achievements. Colleges had quotas for admitting women, Jews, and racial minorities. School administrators openly disparaged women, and there were severe restrictions regarding housing, dining, curfews, and studying. Women, including Ruth, had to leave jobs when pregnant. There was discrimination in hiring for positions in law firms or for clerkships. But Ruth persevered, with her husband as equal life-partner every step of the way. While a law professor at Rutgers University she participated in a successful lawsuit seeking equal pay with her male counterparts. Many more lawsuits seeking to end gender inequities followed. As lawyer, federal judge, and the second woman appointed to the Supreme Court, her remarkable career was forged from strength, determination, and pure guts. Rappaport tells Ruth’s story chronologically, punctuating it with Bader’s own words. Differing typesets, font sizes, and colors separate the quotes from the cogent, informative narration supplied. Per series formula, there is no title on the front cover—just Velasquez’s oil portrait depicting her intensity and serious demeanor. Interior illustrations focus on Ruth in every phase of her life and perfectly match the text.

An insightful and fascinating examination of Ginsburg as woman and jurist.